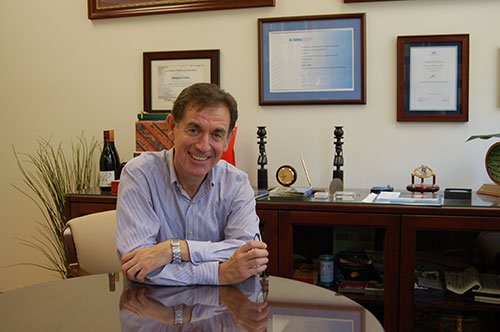 Professor Ortiz received a BS degree in Civil Engineering from the Polytechnic University of Madrid, Spain, and MS and Ph.D. degrees in Civil Engineering from the University of California at Berkeley. From 1984-1995 he held a faculty position in the Division of Engineering of Brown University, where he carried out research activities in the fields of mechanics of materials and computational solid mechanics. In 1995 he became Professor of Aeronautics at the California Institute of Technology where he is Frank and Ora Lee Marble Professor Emeritus of Aeronautics and Mechanical Engineering since his retirement in August of 2020. He served as the director of Caltech’s DoE/PSAAP Center on High-Energy Density Dynamics of Materials from 2008-2013. He concurrently holds a Bonn Research Chair in the Institute for Applied Mathematics of Bonn University and is Adjunct Professor and Distinguished Timoshenko Fellow in Mechanical Engineering at Stanford University. Professor Ortiz has been a Fulbright Scholar, a Sherman Fairchild Distinguished Scholar at Caltech, Midwest and Southwest Mechanics Seminar Series Distinguished Speaker, an elected member-at-large of the US Association for Computational Mechanics, a, Alexander von Humboldt Senior Fellow at the University of Stuttgart and the Max-Planck Institute for Mathematics in the Sciences in Leipzig, and a Hans Fischer Senior Fellow of the Institute of Advanced Studies of the Technical University of Munich. He is a Fellow of the US Association for Computational Mechanics, elected Fellow of the American Academy of Arts & Sciences and an elected Member of the US National Academy of Engineering. Professor Ortiz is the recipient of the 2002 IACM International Computational Mechanics Award, the 2007 Ted Belytschko Medal of the USACM, the inaugural 2008 Rodney Hill Prize conferred every four years by the IUTAM, the 2011 Zienkiewicz Prize of the Spanish Association for Numerical Methods in Engineering (SEMNI), the 2015 Timoshenko Medal of the ASME and the 2019 John von Neumann Medal of the USACM.. Professor Ortiz has served in the University of California Office of the President Science and Technology Panel, the Los Alamos National Laboratory T-Division Review Committee, the Lawrence Livermore National Laboratory Predictive Science Panel, the Sandia National Laboratories Engineering Sciences External Review Panel, the Lawrence Livermore National Laboratory Chemistry, Materials, Earth and Life Sciences Directorate Review Committee, the Lawrence Livermore National Laboratory Engineering Directorate Review Committee and the National Research Council Panel for the Evaluation of QMU. He has been editor of the Journal of Engineering Mechanics of ASCE and of the Journal of Applied Mechanics of the ASME and is presently editorial advisor of the Journal of the Mechanics and Physics of Solids and member of the editorial boards of the Archive for Rational Mechanics and Analysis, the International Journal for Numerical Methods in Engineering and of Computer Methods in Applied Mechanics and Engineering Journal.